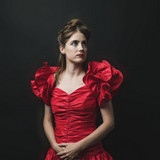 Jess Locke's forthcoming album Don't Ask Yourself Why will be released on Friday 26 March 2021. The Melbourne-based singer-songwriter is known for penning indie guitar-pop tracks that are at times subtle and full of melancholy, at times delivered with an acerbic tongue, but always steeped heavily in narrative. Locke shared the first taste of the record earlier this year with ‘Fool’ - a simple and raw track, seeking to partner dirty grunge guitars, a fuzzy lead, gritty vocals and a punchy rhythm section. It received airplay across Australia and beyond with radio additions at Double J, FBi Radio, RTR, & SYN, plus spins on triple j, KEXP & more. Don't Ask Yourself Why was recorded by Jess Locke and her bandmates James Morris and Chris Rawsthorne, along with producer Rob Muinos (Saskwatch, Julia Jacklin). On Don’t Ask Yourself Why, Locke invites contemplation. "I mean the phrase ironically, because really, I do want you to ask why" explains Locke. "The whole album is about human behaviour, our egos, and our ability or lack-there-of to reflect on why we act and think the way we do." Don't Ask Yourself Why follows Locke's acclaimed 2017 LP Universe which debuted at #18 on the AIR Independent Label Album Chart, landed triple j Feature Album, was nominated for the Australian Music Prize and was #20 in Rolling Stone’s 50 Best Albums of 2017.