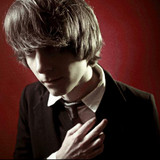 This album was made in hell. ‘Rose’, the long lost debut album by French pop noir songwriter Lian Ray, was always intended to be an album for the whole world to hear. However, when the album was finished, Lian found himself in an extremely dark place and ‘Rose’ was never released. Until now. ‘Rose’ was recorded in 2012-2013, a time when Lian was drenched in a toxicating pool of lies, cheating, drugs, shame and depression. During that time, he lived in Berlin and had a short, destructive fling with a woman named Rose. Rose disappeared rather quickly, but left the broken songwriter a muse - one that took on mythical proportions, providing a pitch black, honest story of catastrophic love. The storyline is drenched in intriguing romantic endeavors and heavy substance abuse. The album concept can been seen as a loose homage to the ultra-French sounding Melody Nelson by Serge Gainsbourg, and captures a nightly romantic spirit. After recording ‘Rose’, Lian hit rock bottom and his life in Berlin took even darker turns. He went off the grid for a few years, self-destructing in a spiral of drug abuse. Until, after attempts since 2016, Snowstar Records got in contact again to finally release this almost-lost record. A beautiful album (for the listeners), a painful album (for Lian). (Photo Credits: Maarten Boswijk & Lionel Samain)