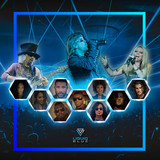 Known for their popular remakes, this San Diego based ensemble is The World's Most Traveled Band and has performed in more than 100 countries and received a Guinness World Record®.

In 2005 Liquid Blue became the first American act to be signed by a major Chinese record label and was chosen to represent the United States at the CCTV kick-off concert for the 2008 Summer Olympics in Beijing. The group has received more accolades, awards, and recognition than any other cover band in the music industry. Liquid Blue has released 16 full-length albums as well as 28 EP's and 55 singles. This represents the world's largest catalog of cover remakes from one artist. The multi-language "Earth Passport" is the band's biggest hit to date, reaching #3 on the Billboard Hot Dance Singles Sales chart and #12 on the Billboard Hot Singles Sales chart. The band's highly acclaimed debut LP, SUPERNOVA which featured all original music, was awarded Pop Album of the Year in 2009 at the Los Angeles Music Awards. It was produced by David DeVore, (12 multi-platinum LP's) and mixed by (six-time Grammy winner) Joe Chiccarelli. Tracks from this LP have been included on 25 compilations. The single "Real" was the #1 Indie Label song in the U.S. in 2005. Liquid Blue was named "America's Best Independent Artist" twice and also finished runner-up for "Best Band" twice at the International Music Awards.