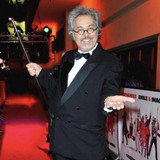 Singer, songwriter, and guitarist Patrick Hernandez, born to Spanish parents in a northeast suburb of Paris, was one-third of Paris Palace Hotel (aka PPH), a trio who released a handful of post-glam and pop singles during the mid-'70s. Later signed as a solo artist to Aquarius, a Paris-based label that had issued PPH's "Back to Boogie," Hernandez partnered with producer Jean Vanloo and had tremendous success with his first single, "Born to Be Alive." The driving, peppy Euro-disco number, released in late 1978 and the title track of his debut album, became a global hit -- number one in several countries, including France and Italy, Top Ten in the U.K., and Top 20 in the U.S. (Around this time, one of Hernandez's background dancers was a pre-fame Madonna Ciccone.) Hernandez went on to release two albums, Crazy Day's Mystery Night's (1980) and Good Bye (1981), as well as a handful of singles scattered through the 1990s, but none of the output stood a chance of regaining his early commercial momentum. Hernandez eventually retreated from the industry. ~ Andy Kellman, Rovi