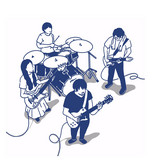 PEEK is an instrumental band with a lyrical clean tone sound of two guitars and a comfortable groove. The band was formed by a university encounter in Tokyo.  Released the 1st album "Afterworld" in March 2020.Spread by word of mouth, such as recording the highest 8th place in the instrument section of the itunes daily ranking in Japan.  From the second single "Dawn Alone" delivered in December 2020 Produced with Mr.Mino (toe) as a sound engineer.  In January 2021, They were selected as the best new artist of the month by the music media "Tower Doors" operated by Tower Records.  Yu Maeda - Guitar Taku Kanzaki - Guitar Yui Ichikawa - Bass Kazuhiro Suzuki - Drums  HP https://peek-music.online