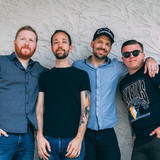 The combination of energy and sincerity has long been the hallmark of Punchline, a Pittsburgh, PA band that prides itself on constantly trying to craft honest and meaningful songs. In an era of short attention spans, their new album LION is a testament to their commitment to creating a truly memorable musical journey. The largely self-produced roller coaster ride starts with the album’s first single “Friend From The Future”, an upbeat yet emotional punk rock song that is sure to appeal to both the band’s longtime following and new listeners alike. The distinctive voice of singer Steve Soboslai offers thought-provoking lyrics paired with infectious melodies, challenging those who cannot seem to see the present tense for what it is — an opportunity to make a change and make a difference. Friends Matt Theissen of Relient K and Anthony Raneri of Bayside even drop by for guest vocalist appearances on Lion. Yes, Punchline is a band that never shies away from reinvention. The Pittsburgh group prides themselves on musical innovation. In their earliest releases, Punchline took a progressive approach to punk rock. The band's 2004 Fueled By Ramen release “Action” set the tone for what they'd become: a rock band with extreme pop sensibility, who oftentimes paid no mind to formulaic song norms. They pushed the envelope in a genre which rarely did, and this bold approach brought with it a strong, loyal fanbase all across the world.