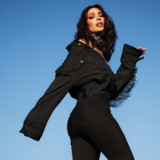 Senidah is the biggest Slovenian musical export since 2019 and a singer-songwriter called "The Balkan Trap Diva" by the media.   Senidah began her solo career with the release of her single Slađana in March 2018. The song was named "Hip-Hop/Rap Song of the Year" at 2019 Music Awards Ceremony and was the lead single of her debut studio album Bez Tebe, released in March 2019. Her album was followed by a string of commercially successful original singles such as Mišići (>70,000,000 views), Kamikaza (>100,000,000 views). In November 2019, Senidah released her hit single 100% with German rapper and entrepreneur RAF Camora, which caught the attention of all German speaking markets and resulted in over 70,000,000 YouTube views and 30,000,000 streams only on Spotify to date. Senidah started the year 2021 with a big bang, making her dream come true - releasing the single Dođi (feat Senidah) with Bosnian music legend Dino Merlin, reaching >1,700,000 streams within its first 24 hours, making it #10 on YouTube Trends.   As the lead singer of the Slovenian band MUFF, Senidah rose to prominence with their first single Naj sije v očeh (Keep the Glow in the Eye), which was awarded Song Of The Year in Slovenia followed by their debut album being declared Album Of The Year. In 2014 the band took part in the preselection contest for Slovenia's representative at the 2014 Eurovision Song Contest.   With her increasing popularity, Senidah now takes over Europe.