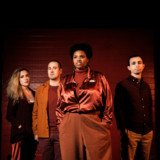 Thanks to their original line-up of trombone, electric guitar, double bass and drums, N∆BOU is a breath of fresh air on the Belgian jazz scene. On the trombone, band leader and composer Nabou Claerhout is looking for a sound all her own: by means of all sorts of effects, she creates a dreamy musical framework with a strong atmospheric and melancholic resonance. After their first outing with debut EP ‘Hubert’ – for which Claerhout got nominated for the Sabam For Culture Award ‘Jazz Composer 2019’ – the band is refining that special sound further on their first full album ‘ You Know’. Lush and intimate sounds are alternated with strongly rhythmically based compositions, while groovy bass riffs from Trui Amerlinck, Mathias Vercammen’s elaborated drum patterns and the modern, virtuoso guitar play of Roeland Celis play their part as well in this musical adventure full of highlights – all created in combination with Claerhout’s distinctive trombone playing “that sings, cries, pulsates, tells and knows how to make many hearts week through well-constructed contemporary pieces”. N∆BOU will be releasing their debut album 'You Know' on October 22nd via Outnote Records.