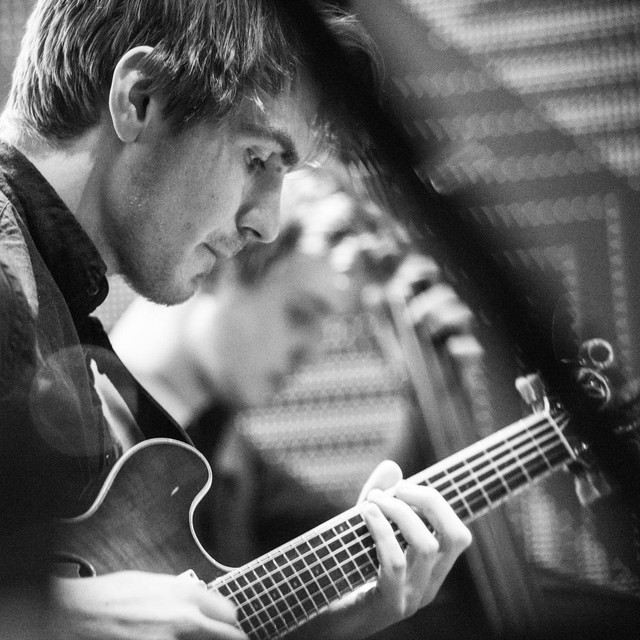 Gijs Idema (1996) started playing the guitar when he was eleven. At first he chose the music of Jimi Hendrix and Led Zeppelin, but with a slight stop at classical music he arrived at beautiful world of jazz. After hearing guitarists like Wes Montgomery, Joe Pass and Jim Hall, Gijs was convinced he wanted to be a jazz guitarist. A few years later, Gijs completed his bachelor at the Conservatorium van Amsterdam, studying with Jesse Van Ruller and Reinier Baas, with the highest honors possible. He then moved to New York to pursue his masters at the Manhattan School of Music where he got the chance to study with Jim McNeely, Ron Carter, Dave Liebman and Arturo O'Farrill. Today, Gijs spends most of his time working with his Gijs Idema Trio, releasing the trio's debut album 'Squares' in 2018. Two year later he releases his solo jazz guitar debut Marking Time. Additionally, he explores his collaboration with vocalist Anna Serierse which has resulted in the Idema/Serierse Quartet with Cas Jiskoot and Tim Hennekes. In November 2020, the quartet will release their highly anticipated album 'Motus'. In addition to these recordings, Gijs has won the Prinses Christina Jazz Concours (2014), Leidse Jazz Award (2016), Expression of Art Award (2017) and the Keep an Eye Records (2019), as well as receiving support from the Prins Bernhard CultuurFonds, VandenEnde Foundation and VSB Fonds for his projects. More info at www.gijsidema.com