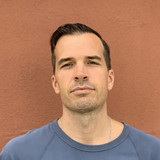 Luke Cissell's versatility as a musician and composer at the intersection of post-rock, bluegrass, and classical traditions has taken him from honky-tonks and rock clubs to symphony halls in the U.S. and abroad. Credited on albums by artists as diverse as Alex Wiley, Ingrid Michaelson, and Philip Glass, Cissell is a seasoned recording artist in his own right. The Louisville, Kentucky-born multi-instrumentalist and composer has produced every track and played every instrument on nearly the entirety of his catalog: Noise In The Street (2009), Cosmography (2013), Infinite Progress (2014), Backwoods (2015), String Quintet (2016), Sonata for Viola and Piano — Three Piano Pieces (2017), Thinking / Feeling (2018), String Sextets Nos. 1 & 2 (2019) and Nightside (2020). —Silver Squid Music ASCAP