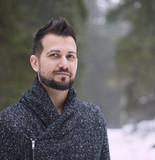 Glen Gabriel is an award-winning film composer & music producer primarily in the field of orchestral scores combined with electronica. With over 20 feature films under his belt, including James Cameron’s viral project “The Game Changers” (produced by Arnold Schwarzenegger & Jackie Chan etc), 100 commercial major brands & about 700 TV episodes, he is no stranger to cinematic music. Starting out as a child he spent lots of time getting advice from artists from the biggest Management company in Europe owned by his father. Because of this he met with many professionals in the industry, such as the only Swede who toured with Elvis Presley (Per-Erik Hallin), family friend & legend Chick Corea & world-famous author Astrid Lindgren. In ’06 Glen released his first album to the public, gaining momentum online. His music reached thousands each day and was asked to write music for films + promos. While writing music for brands such as Coke Zero, Mercedes, Lipton, Electrolux, AT&T, XBox and Nike to mention a few, he wrote orchestral arrangements for bands and rock stars, including Miljenko Matijevic from STEELHEART collaboration with Robby Krieger from legendary band The Doors   Glen’s ability to fusion many genres have taken him from producing award-winning albums featured in the Olympics to composing ballet for the Opera House of Zurich. Glen has released 4 albums of his own music & recorded orchestras in studios all over the world, including iconic Abbey Road Studios in London, UK.