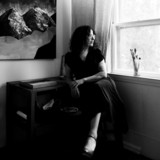 Giovanina Bucci is a singer-songwriter and guitarist based out of Burlington, VT. Born and raised in Plattsburgh, NY, Giovanina has spent the latter half of life feeding a relentless appetite for travel and adventure. She has made homes in Ithaca, NY, Londonderry, Ireland, St. Thomas, USVI, Flagstaff, AZ, Durango, CO, and now Burlington. Having soaked up a diverse catalog of influence, culture, and conversation--Giovanina has gathered a collection of stories and experiences that have indubitably shaped her playing and writing. Rooted in blues, soul, and folk, her storytelling is intimate and deeply personal--which is no mystery if you've been able to catch a live performance. Giovanina's 2021 release, Storytellers, will be her third solo record, following The Road Home in 2013 and A Bit of Alright in 2015. Storytellers was produced by Ryan Montbleau and features Bob Wagner on guitar, Josh Weinstein on bass, Jay Lesage on piano and Dwight Ritcher on drums. Giovanina also plays in a trio side project called Nina's Brew. They released their first EP, Don't Tell Mama, in 2017 and a full-length album, Mixtape in 2019. Giovanina continues to balance her music career as a soloist, band member, and alongside the many talented friends with whom she collaborates.