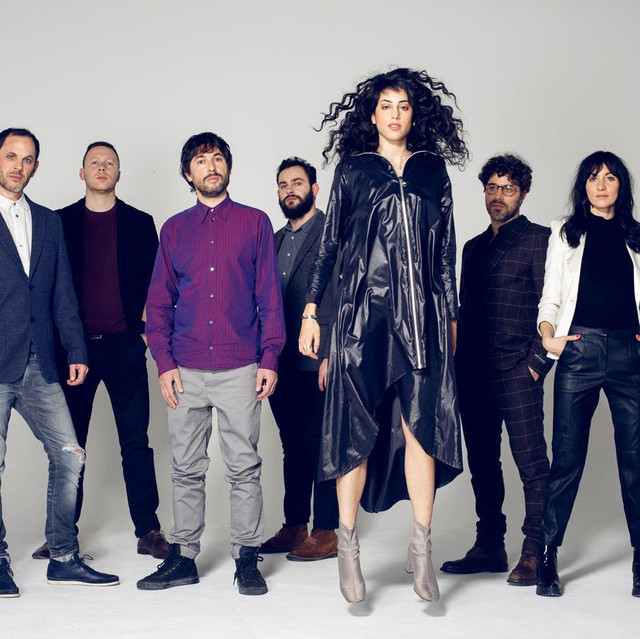 London-based collective Oi Va Voi make it hard to pin them down -- while their music easily allows for such diverse labels as "dance," "rock," "electronica," and "world music" to be applied to them, none of these labels describes the sound of the band to the fullest. Oi Va Voi were able to achieve this through a rather unique combination of cultural and ethnic backgrounds of the bandmembers, with each of them bringing something original to the table. Rock & roll and Jewish music, dance beats and klezmer, Eastern European horns and trip-hop sensibilities -- all these elements coexist in the music of Oi Va Voi, creating a dense and exciting whole that sounds like little else out there. Oi Va Voi (which is Yiddish for "Oh, dear God," though on certain occasions bandmembers hinted at the fact that literal translation is a bit raunchier) came together in the late '90s. Founding members Nik Ammar (guitars, vocals), Josh Breslaw (drums, percussion), Leo Bryant (bass), Steve Levi (clarinet, vocals), Lemez Lovas (trumpet, vocals), and Sophie Solomon (violin) had their backgrounds in truly diverse music outfits, yet this diversity didn't stop them from trying to create something of their own together. The title of their self-released first record pretty much gave away what the band was trying to achieve -- it was called Digital Folklore (and had since become a valued collectors' item). Vibrant live shows played around England earned Oi Va Voi a very strong reputation, and in 2002 they were nominated for BBC Radio 2 World Music Awards solely on the strength of their performances. Soon after that, KT Tunstall joined the band on vocals, and Oi Va Voi released their "proper" debut, Laughter Through Tears, in 2004 via Outcaste Records. The album deftly showcased their potential -- next to more traditional, dancefloor-oriented songs like "Refugee" sung by Tunstall were compositions inspired by traditional music of Israel, the Balkans, and Yemen performed by a range of guest vocalists from all around the world, from Tunis to Uzbekistan. Reviews were glowing, but soon internal problems threatened to stop the band dead in its tracks. First, Tunstall left to pursue a solo career; then founding member Sophie Solomon followed suit. Left without a voice, Oi Va Voi began auditioning vocalists -- the bandmembers claimed that at a certain point they felt like they had listened to "every vocalist in London," with frustratingly little results. Label executives weren't happy with album sales and tried to push the band in a more commercial direction, which did not agree with Oi Va Voi at all. The recording of a follow-up album was further complicated by a serious illness within the band. Without a contract, without a singer, and down to the core of only four members (Ammar, Breslaw, Levi, and Lovas), Oi Va Voi were dangerously close to calling it quits. In fact, they did stop all group activities for about a year, until things began to get considerably brighter in 2006. First, Oi Va Voi found the right singer, newcomer Alice MacLaughlin. Then they met producer Mike Spencer, best known for his work with such pop artists as Erasure, Kylie Minogue, and Jamiroquai yet also hugely interested in traditional music. With a renewed band, rounded up by bassist Matt Jury, and a new label behind them, the re-energized Oi Va Voi departed to Tel Aviv to work on their next record. The album, recorded in both Israel and London, was issued by V2 Records in summer 2007. It was left eponymous, perhaps to signal a new beginning of sorts for the band, and saw Oi Va Voi embracing their peculiarities and creating a swirling mix of rock music, soulful electronica, and world music influences. Upon completion, MacLaughlin chose to continue as a solo artist, so a new singer had to come into the fold. It was Bridgette Amofah, who became a wonderful replacement for either Tunstall or MacLaughlin. Another member, virtuoso violinist Anna Phoebe, joined the live lineup. Now a seven-piece, Oi Va Voi went on to tour extensively in support of their second record. Their touring schedule included a number of European festivals as well as concerts in Israel, Turkey, and Russia. Amofah made her recording debut for the band on its fourth album, which was recorded at London's RAK Studios. Travelling the Face of the Globe also featured guest vocals from Dick Rivers and Agi Szaloki, and following the record's release Oi Va Voi hit the road in support of the album on a U.K. and European tour. After the tour's conclusion, Ammar left the band and was replaced by Michael Winawer. Oi Va Voi took an extended break from recording but remained active on the live circuit. In 2015 they began writing what would become their fifth record. Memory Drop was produced by the group's drummer, Josh Breslaw, and mixed by Moshik Kop (Rob Ellis, Petite Noir), and the single "Searchlight" became the first taste of the new material. The record was released fully in November 2018. ~ Sergey Mesenov, Rovi