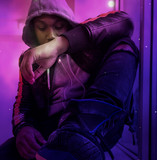 Growing up in The Bronx, NY, he was forced to make a way where there was none. Drama B has witnessed music’s ability to heal scars and inspire change. Lead by the styles of legends such as Bone Thugs N Harmony, Michael Jackson, and The Temptations, he works to offer something memorable and exciting to the game. His skills grew through his adolescence, and at the age of 19, he enrolled himself in Touro College majoring in Digital Media Arts. Upon graduation, he became an intern at Atlantic Records (Lounge Studios). These training spaces pushed him to diversify his skills learning everything from recording techniques, to insight on the music industry. Drama B is now an artist whom projects life through lyrics, Transforms instrumentals to vibes. Drama B formed his on label DramaBMusic, LLC in 2020. Drama B puts life back into music. Accolades "One Nation" (Play at the 2016 Olympics) "No Glory" (feat. M.I.M.E & Drama B) (100 Million+ on YouTube.) "Champion" (Featured Netflix Original Series "ELITE" Season 2 Ep 2) "I Can Flex" (Featured On Lavar Ball's Reality Show "Ball In The Family") "Paranoid" (Featured on "On My Block" Netflix Original Series) "Mountains" (Featured On Go Pro)