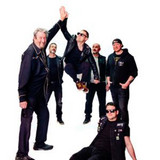 Formed in 2003, the boys of 500MTM came together on the banks of the Ohio River between Cincinnati, OH and Newport, KY. Their genre-bending take on Punk Rock and Americana has been received worldwide in the form of movies, tv, video games, and their award-winning live show. The band was originally signed to Deep Elm Records in 2007 and quickly gained a reputation nationwide for its rigorous touring schedule.

The single “All My Friends are Crazy” was the first song that helped put the band on the map, being included on live XGames events and other sports documentaries.