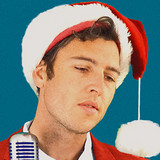 Over the past fifteen years, James Lanman’s music career has been quite a winding road. First as a DJ in Europe, then as a troubadour in bars and cafés around Los Angeles, followed by a run as the frontman and founding member of The Good Hurt which saw the indie pop rock act touring nationally and lighting up venues from Seattle to Boston. Then, once again as a solo artist, living in New York City where he reinvented himself as a jazz and soul singer before selling everything to purchase a van so he could live full-time on the road performing house concerts across the US and Canada for three years. After hundreds of performances from SXSW to NAMM, The Palace of Fine Arts Theater in San Francisco to the Fargodome in North Dakota where he delivered a Ted Talk on his life as a travelling musician, Lanman turned his attention toward his discography. In 2019, he recorded an acoustic album of originals called, MOSAICS. In that same year he followed up with a full length Christmas album, Merry Christmas Darling. The titular song and namesake of the album went viral on Spotify netting Lanman thousands of loyal monthly listeners. In 2020, he recorded a concept album, “America”, as a nod to some of his songwriting heroes, giants who defined a nation through music that blurred the lines between patriotism and protest. Lanman penned his first original Christmas song titled, "This Christmastime" at the end of 2021, also releasing his version of "Let it Snow!".