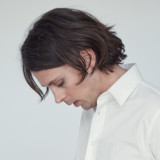 "Few singers can command an audience's attention quite like Albin Lee Meldau. His voice is breathtaking, soulful, thunderous and impossible to ignore." - USA's National Public Radio about Albin Lee Meldau after his performance in NPR Music Tiny Desk Concert Albin Lee Meldau’s lyrics are poetic and emotional and that, together with beautiful melodies and an breathtaking voice, shows his amazing ability to tell a story whether it’s in Swedish or English.

Albin released his debut single “Lou Lou” in 2016, a song that reached listeners all over the world. It was followed by two EP’s and tours across Europe and the USA. The debut album “About You” was released in the Spring 2018. The same year Albin participated in the major Swedish TV show “Så mycket bättre”, where he with his expressive way, musicality and unique interpretations of the songs made the Swedish viewers take him to their hearts. In 2019 he went on two sold out tours and also released the EP “The Purgatory Sessions” with acoustic versions of songs from his debut album. Albin’s second album, “På svenska” was released in 2021 - it’s a very personal record where he tells the story of his journey from active drug abuse to a sober life with lyrics that are both touching and emotional but also brutal and extremely honest. When creating music he gets his inspiration from music history; from blues, soul, reggae, the big Swedish troubadours, but also from contemporary music makers. A new English album is planned for 21/22