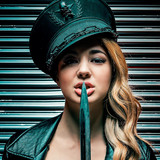 The Charm The Fury

Featuring The Charm The Fury

The Sick, Dumb And Happy is an angry record driven by a collective distaste for the state of the planet in the 21st century, underpinned by ferocious intelligence and a heartfelt desire to wake people out of their smartphone stupors. “People don’t listen to metal music to hear this big glossy pop thing, they listen to it because they’re sick of that and they want something different,” says drummer Mathijs Tieken. “So we stripped everything down to the core and worked super hard on that core. The people that are really into metal music, even the young kids, gravitate to bands like Metallica and Pantera. That says something, that even with labels marketing stuff directly to kids, you still see kids with Metallica shirts throwing the horns. Those are the bands that we always go back to. That stuff is timeless.” Powered by thunderous grooves and laced with incisive melodies combined with darker and moodier materials, The Charm The Fury have established themselves as one of the most promising new metal bands in Europe. The Dutch quintet are armed, ready and hungry for the next big push. When The Sick, Dumb & Happy explodes in 2017, the smart money is on these diehard noisemakers claiming their rightful place among the new metal elite. They have the songs, the determination and the charisma to make it happen. Bet against them at your peril. Vocals – Caroline Westendorp Drums – Mathijs Tieken Guitars – Koen Stokman Guitars – Martijn Slegtenhorst Bass – Lucas Arnoldussen