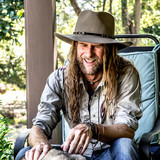 A literate and impassioned songwriter whose characters are often caught barely hanging on to the edges of American life, Grayson Capps is a bit like a New Orleans version of Tom Waits, albeit more of a roots rocker and bluesman in actual musical execution. While the music industry places him under the Americana umbrella, Capps has proven his aesthetic to be much deeper and wider than that classification would allow. From his days in the rootsy folk thrash of the House Levelers and blues trashers Stavin Chain while still in college to emerging as a gravel-voiced Southern Coast singer songwriter on 2005's If You Knew My Mind, Capps was always a deep, accomplished musician who knew his music history inside-out and had the poetic songwriting chops to work from that knowledge. Returning to his native Alabama after Hurricane Katrina, he issued an astonishing variety of recordings including 2008's Rott & Roll, before assembling Willie Sugarcapps with Will Kimbrough, Anthony Crawford, and Savana Lee Crawford, with spouse, engineer, and producer Trina Shoemaker. Their self-titled 2013 offering was a porch-recorded, raw, wily, rootsy collection of songs, saturated in the salt and soil of the Gulf Coast region. In 2017, Capps released his most intimate collection, Scarlett Roses. Capps was born April 17, 1967 in Opelika, Alabama, the son of a Baptist preacher and an Auburn University student. After his birth, both of his parents ended up being teachers in Brewton, Alabama. They moved to Fairhope, Alabama when Capps was in the seventh grade, and it was there that he developed a lifelong fascination with theater, eventually earning a partial scholarship to Tulane University in New Orleans to study acting, graduating with a B.F.A. in 1989. But acting wasn't the only thing Capps studied at Tulane. He also learned to play guitar and joined a band called the House Levelers, who specialized in what the band called "thrash folk." The group signed with Tipitina's Records in 1990 when Capps was barely 21 years old, and following a whirlwind and musically quite successful year, Capps left the band, choosing to remain and make his home in New Orleans. He started a new band with John Lawrence called Stavin' Chain and they signed with Thomas Ruf's Germany-based Ruf Records in 1998, releasing a single album simply called Stavin' Chain, in 1999, before disbanding. Capps met Shainee Gabel, a young director who was filming a documentary called Anthem, and she ended up using several of his songs in the finished film. Capps had told Gabel about an unpublished novel his father, Everett Capps, had written, and once Gabel read it she knew she had to film it. She wrote a screenplay and the end result was the 2004 film A Love Song for Bobby Long, which featured Capps in a bit part and also used four of his songs as part of the soundtrack. The regionally released Grayson Capps album appeared in 2005 on Hyena Records followed by a solo debut proper, If You Knew My Mind, later that same year. During this time, Capps continued to make his home in New Orleans, but the Katrina disaster at summer's end in 2005 forced him to leave the city for Nashville. A second solo project, Wail & Ride, also on Hyena, came out in 2006. Ruf Records re-released Stavin' Chain in 2007, and another Hyena release, Rott 'n' Roll, appeared in 2008. After a couple of years in Nashville, Capps formed a new band called the Lost Cause Minstrels, made up of a crack group of Gulf Coast musicians, and began recording an album of the same name. Midway through, he decided to return to his home state of Alabama, where he, the band, and co-producer and partner Trina Shoemaker finished it. The Lost Cause Minstrels was released on Royal Potato Family Records in June of 2011. The critical acclaim for the recording put Capps on the road for a time -- he returned to Alabama to form the songwriter's collective Willie Sugarcapps with Will Kimbrough, Sugarcane Jane (i.e. Savana Lee and Anthony Crawford), and Corky Hughes. Its members -- most of whom live on or near the Gulf Coast of Alabama (Kimbrough resided in Nashville but was an Alabama native) -- came together while performing a songwriter's round at the Frog Pond gathering on Blue Moon Farm in Silverhill, Alabama. Their self-titled 2013 album garnered universally positive reviews. In 2015, Appaloosa issued the double-length compilation Love Songs, Mermaids and Grappa. Two years later, Capps' wife and award-winning producer Trina Shoemaker and multi-instrumentalist Corky Hughes co-produced the nine-song Scarlett Roses, cut at the Capps' home studio over two days with a handful of players including Dylan LeBlanc singing harmony on "New Again." The album was released by Royal Potato Family in November of 2017. In June of 2020, at the height of the coronavirus pandemic, South Front Street: A Retrospective 1997-2019 appeared from Royal Potato Family. Unlike virtually any other best-of out there, the set was compiled by Shoemaker, who sought out catalog tracks that best represented not only Capps' career, but their life together. Further, she revisited all the original tracks (many of which she produced originally) and remixed many, ultimately creating a slew of new versions for fans. ~ Steve Leggett, Rovi