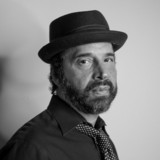 Elsten Torres is a two-time GRAMMY-nominated and BMI award-winning singer-songwriter, musician and producer. Born in Havana, Cuba, raised in New York City and currently living in Miami. Through his endeavor, Elsten has garnered a vast domestic and international fan base. An accomplished artist having reached Billboard’s top ten charts over six times including a #1 hit for 5 weeks. He is a leading voice and exponent of the rich South Florida bilingual artistic community. Elsten has performed on stages all over the country and around the world. He donates his time to charity organizations such as "Musicians On Call" and “One Song & A Beatle”. In the wake of his 2016 release, “Exitos Acusticos” which was a collection of his biggest hit songs recorded by internationally known artists,

He released his album, “At The End Of Love” for Warner Chappell Music in 2020 and is currently working on a new musical project that will continue to expand his artistic horizon.