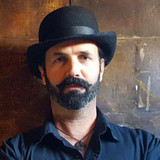 Nick Spear is a Montana-based singer songwriter. His songs have been featured on television’s A&E and Lifetime networks, onstage at the Oregon Shakespeare Festival, and at various corporate events, including the Google AR/VR Developers’ Conference. His 2017 Album WEST DAKOTA SNAKES. was listed as a prospective Grammy nominee for Best Americana Album. His song "Tap 'er Light" from that album was used on NPR's podcast, "Richest Hill." Check out his new album, TRAIN WRECK OF A HEART, and his new singles "Milky Way" and "The Saddle Bar X."