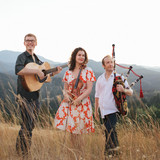 The Fire is a high energy traditional music band that combines world class performances of blazing Scottish music with a distinctly Californian flare. The group includes International Scottish Fiddle Champion Rebecca Lomnicky, dynamic bagpiper and multi-instrumentalist David Brewer, and Royal Conservatoire of Scotland graduate Adam Hendey on guitar, bouzouki, and harmonium. All three band members have lived and studied in Scotland, and work together to further contribute to the traditions of Scottish music in America through performances and workshops funded by agencies such as the National Endowment for the Arts.   The Fire has headlined main stages at Celtic festivals such as The KVMR Grass Valley Celtic Festival, The Pleasanton Scottish Highland Games, The Pacific Northwest Scottish Highland Games, and has performed at a variety of venues throughout the United States, United Kingdom, and Ireland.   The Fire is currently based out of Santa Cruz, California, and has recorded three albums together. For more about The Fire, please visit: www.thefirescottishband.com.