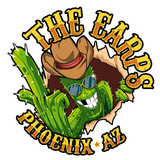 Arizona’s Cowpunk pioneers since 2003. Piercing your soul with incendiary riffs, razor-sharp beats, and throat-wrenching choruses that’ll stick in your craw. We will go down on your permanent record. The band was born in 2003 in Phoenix, and toured the country for years playing with too many notable bands to mention by name. Known for highly entertaining live shows that fall somewhere between Vaudeville, glam rock and R-Rated episodes of Hee Haw, The Earps’ musical stylings range from shitkickin’ rock anthems to Bakersfield honky tonk, with traces of Southern rock and rockabilly. It’s been said if you’re a fan of The Georgia Satellites, Nine Pound Hammer, Jason & The Scorchers, Dwight Yoakam, The Beat Farmers, or 80’s metal you’ll love The Earps. Once you hear The Earps, you’ll be a slave to the groove, to the blistering guitar hooks, to the witty lyrics and sticky melodies. You’ll suddenly forget who your other favorite bands were and be overcome by an urge to dig up all of our old albums. You’ll wonder what took you so long. For those of you who have been there all along, you’re gonna love the new stuff. We’ve been off the grid for a few years and gone through some personnel changes, but we’re stronger, faster, louder, and not slowing down any time soon. Hope to see you soon. We couldn’t do what we do without you, Buckaroo.