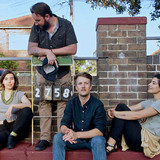 Burralow is an indie folk outfit fronted by the songwriting duo, Sarah Heydon & Ryan Sheridan. Together these two hopeless-romantic songwriters have penned and orchestrated a collection of stories from life on the road and living in the Blue Mountains. With a sound inspired from artists such as Cat Power to The Beatles, their shows are dotted with instrument changes and striking melodies. Sarah sings and performs from behind a stripped-down drum kit and glockenspiel combination, while Ryan sings and wrangles a guitar. The band’s timbre teeters between acoustic and electric with fretting double and electric basses, Andrew Provan dueling between guitar and mandolin, and Maizy Coombes striking the fiddle. The group has gained a following from playing venues across Greater Sydney and joined the festival circuit at St. Albans Folk Festival, Salvation Sounds and Good Company. Burralow’s self-titled debut EP was recorded and co-produced by Tim Kevin over 2017-18 at Oceanic and Tempe River Studios, Sydney and will be available for digital download, physical purchase and online streaming on Feb 15. They are launching their EP on Feb 15 at the Petersham Bowling Club with some local up-and-comers.