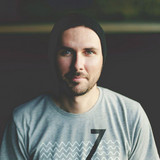 Useless D.I. grew up in an environment where music played an important role. His father collected LPs and this contributed to his interest in guitar music, which he developed at an early age. His sister was a 90s generation X grunge and metal fan and had a great influence on his taste for music. At the age of five he encountered the record Nevermind and at that point he decided to become a musician. His parents bought his first classic guitar when he was 10. Answering his wishes, he got an electric one soon after that. With his schoolmates they formed a punk rock band named Fuck Off And Die in 1999. They started playing Nirvana, Sex Pistols, Ramones and NOFX. In 2000 they recorded their debut album Blandest that was self-published a year later Fuck Off And Die did several concerts and then took a hiatus due to school-related obligations that has never ended. In 2008 he has started Be1Ate2 and Kinzie Was A Pornstar a year later. Both bands are still active under the patronage of the label Giljotina Records. Useless D.I. started with the production of electronic music in 2014. His first single Stereofunk/Big Daddy’s Menu was released through the Greek label Diablo Loco Records. Since then his releases are often on top 100 charts on Beatport.