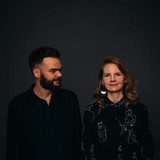 Town of Saints are a European indie folk band started in 2010 by singer/guitarist Harmen Ridderbos of the Netherlands and violinist/singer Heta Salkolahti of Finland when they began busking together after meeting in Austria. The pair soon began touring Europe together and accumulated fans while self-releasing a series of EPs. Dutch indie label Snowstar Records released their debut full-length, Something to Fight With, in 2013. It offered shimmering electric guitar and drums, along with fiddle, acoustic guitar, and piano, for a passionate set that recalled the likes of early Mumford & Sons and Noah and the Whale. As they continued to perform scores of live shows across Europe, Town of Saints fleshed out their sound and membership by adding guitarist Berend Rombouts, bass player Jukka Kiviniemi, and drummer Jesse Bosman. Their second album -- and first as a quintet -- No Place Like This was expected on Snowstar and Universal in the spring of 2016. ~ Marcy Donelson, Rovi