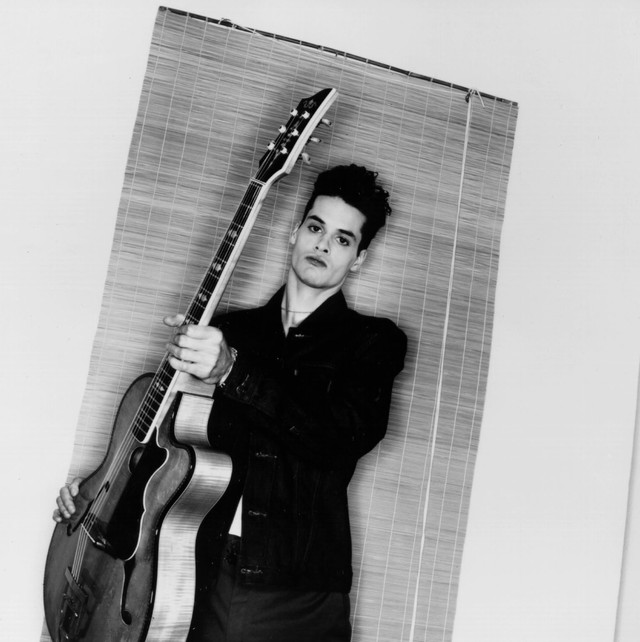 Jimmy Ray's recording career began as one half of techno-pop outfit AV (Alternative Vision). The duo was founded in 1994 by Graham Drinnan (AKA 'Gypsy' or 'Gipsy') who as a solo artist had scored a number of critically acclaimed techno / house hits in the early 90's, most notably 'I Trance You' & 'Funk De Fino' & 'Skinnybumblebee'. AV signed to Sony S2 Records in 1994 but no recordings were ever released. Ray's solo career began in earnest in 1997 on S2. The first single release 'Are you Jimmy Ray?' - a retro-inspired pop hybrid of 1950's rockabilly & 1990's hip-hop, accompanied by a critically acclaimed music video performed well in the UK, US and the rest of the world. The track peaked at #13 in the UK chart in October '97 and the following year smashed into the US billboard Hot 100 chart at #26 going on to peak at #13 in the Hot 100 and into the top 10 sales chart. Ray still holds a long-standing record for the highest starting chart position for a UK act's debut single – a feat unmatched even by superboyband 'One Direction' who entered the chart at #28. The success of the single in the US – selling over 500,000 copies earning Jimmy a 'Recording Industry Association of America Certified Gold sales Award' and a 'American Society of Composers, Authors & Publishers Award' - led to live performances on some of US TV's biggest shows – The Tonight Show with host Jay Leno, The Rosie O'Donnell Show, The Ricki Lake Show, The View and countless other TV & radio slots across the length & breadth of the US. Back in the UK Jimmy appeared on the long-running music show 'Top of the Pops', The National Lottery show as well as many other appearances and performances on all the Major TV & radio channels. Live appearances at the time included a 6-week US Auditorium tour with 'The Backstreet Boys' (including a show at NYC's famous Radio City Music Hall), a MTV 'spring break' gig in Jamaica and numerous promotional & Radio shows across the US & UK. Follow-up singles did well in the UK & US earning Jimmy a second UK hit in 1998 with 'Goin' to Vegas.' Ray's long-awaited self-penned, recorded and produced 'comeback' album 'Live To Fight Another Day', was released in October 2017.