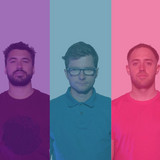 Mosaic started as a duo formed by Jared (lead vocals/guitar) and Victor (vocals/drums) in 2014, before bringing in Chris (vocals/bass) in 2017 after the release of their single ‘Runaway’. Debut EP ‘Wear It Like A Pumpkin Pie’ will be released on April 10th. Pre-save here: