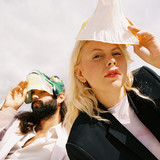 Tolstoys are just a couple of good daughters and sons playing their hearts out. Their colourful journey continues with the release of Describe My Name on 22.5. 2021. Following with a single + music video combo every two months they embrace the marriage of music and visual art while treating each of the upcoming 10 singles as it‘s own chapter, collaborating with a different visual artist every time. It will all come together within their second album 'Mirror Me', set for release on 22.2.2022. The album is produced by Berlin based producer Drew Deal, and melds groovy fretless beats and prickly 80s casio synths with the pristine voice of frontwoman Ela Tolstova, fixing up a captivating concoction of emotion and sound. Their first album Botanika has won the Debut of the Year at the Radio_Head Awards 2017. They performed repeatedly at the biggest local festivals, such as Pohoda, Grape or Colours of Ostrava and also at important showcase festivals around Europe, such as MENT, BUSH, Waves, or Eurosonic Noorderslag. In the past they supported Tom Odell and Lola Marsh during the Slovak leg of their tours, with the project 'Botanika Klasika' they toured with a string quartet and even performed with a Symphonic Orchestra at the Slovak National Theatre. Their frontwoman Ela was included in the prestigeous 30 Under 30 by Forbes.