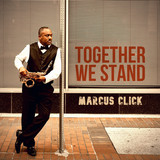 As a native of the Bluegrass State, Louisville, Kentucky, Marcus grew up with aspirations of becoming a pro football player, but his goals changed after having committed over 10+ years of his young life to the U.S. Navy. During this time, his love for jazz grew by listening and learning from the late Grover Washington, Jr., David Sanborn, Kirk Whalum, Najee, the late saxophonists, Art Porter and George Howard. Marcus says on one account,” I became truly inspired by a phone call from the late George Howard. A conversation and experience I’ll never forget.” Marcus last release was the single, “Brand New Day”, which was written and produced by jazz sensation, International Recording Artist/keyboardist, Jonathan Fritzen, whom also performs on the single. This song will keep you locked in for more of Marcus’s music. It debuted at #1 song, with the most spins during its 1st week in rotation on Billboard Smooth Jazz radio stations across the US. It’s even receiving air play in the UK and charted consecutive weeks on The Smooth Jazz Network Top 100, along with charting on other jazz charts. As Marcus continues to perform, along with recording his next musical projects, which are slated to be released Fall 2020, Single: Together We Stand, and early 2021, which has a solid host of musicians, artists and producers that have collaborated to deliver a fresh new hot collection of neo-soul/smooth jazz music you will surely enjoy! So, follow Marcus via social media for the latest news.