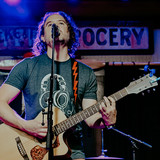 Jason Lyles has always been interested in what lies between genres – in that gray area where sounds tangle together and kick free of any sense of restriction or confinement. Whether it’s the sharp twang of an acoustic guitar blended with the emphatic thrust of some euphoric power-pop echo, or the tumbling movements of mid-90’s alternative rock spliced with 80’s jangle-pop, he has a unique ability to graft musical histories together in a way that doesn’t feel forced or disconnected. Hailing from Chattanooga, Tennessee, Jason is starting a positive music revolution.