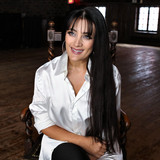 Soprano Giorgia Fumanti is an Italian vocalist known for her renditions of opera arias, movie themes, and traditional and contemporary pop, including albums dedicated to the music of Vangelis. Based in Montreal, Canada since the early 2000s, her major-label debut, From My Heart (2006), charted internationally, including on the Billboard classical charts.

Fumanti was born in Fivizzano, Italy and raised in nearby Aulla, where she began singing in her church choir at the age of 16. She was quickly utilized as a soloist, and while still in her teens, she joined the internationally known medieval choir Il Convitto Armonico. After a period that included studying law at the Universita di Parma, she enrolled at Parma's Conservatorio di Musica Arrigo Boito to study vocal performance. Fumanti relocated to Montreal in 2002, the same year a demo found its way to producer Maurice Velenosi, who became her manager. Using the pseudonym Gio Aria, she released Like a Dream in 2004. Featuring the music of Vangelis, it introduced her refined soprano with a mix choral, orchestral, and pop arrangements. Tours of Canada, Italy, Japan, and South Korea followed, including a performance with the Seoul Philharmonic Orchestra. In 2004, she filmed a TV special that aired nationally on Bravo in Canada, and the following year, among other tour dates, she performed at the Montreal Highlights Festival. In the second half of 2006, Fumanti signed with EMI and recorded an album at Abbey Road Studios in London, with additional sessions in the Netherlands. Late in the year, she was also featured on the Heavenly Voices TV special for PBS with Ryland Angel and Sasha & Shawna. Fumanti's major-label debut and first album under her own name, From My Heart, arrived on EMI's Angel Records in January 2007. Featuring four Ennio Morricone songs and a version of Sting's "Fields of Gold," it charted in several countries, including the U.S., Japan, and South Africa. That March, Heavenly Voices received a DVD release by Capitol's Manhattan Records, and later that year, she toured Canada as a guest of pianist Richard Abel. She later joined opera star José Carreras on a tour of Asia, in addition to her own tours of North America, Europe, and Asia. The French-language album Je Suis followed in 2008. She did another collection of Vangelis music as Gio Aria in 2009, the same year she released the Giorgia Fumanti LPs Peace of Heaven and Magnificat, a collection of songs and arias. Elysium followed on Universal in 2011, and VEGA2 issued the decade-spanning Collection in 2012. A year later, she released the Spanish-language set Corazón Latino, with Essence and Noël en Lumière (with la Croche Coeur) both arriving via VEGA2 in 2015. In the meantime, she became a semi-regular on Chinese television, performing at awards shows, sporting-event opening ceremonies, and the CCTV New Year’s Eve Gala. Fumanti's tenth album, 2018's Amour, included a cover of Leonard Cohen's "Hallelujah" that garnered over a million plays on social media within a few weeks of the single's release. ~ Marcy Donelson, Rovi