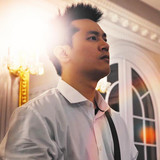 Udi Luqman is a singer, songwriter, and music producer from Brunei. He has released his new independent single “Comeback” in April 2020. His 2011 EP release, “Game of Love,” featured a title track that held the Number 5 position on popular radio station Pelangi FM for several weeks. “Moving On” from the same extended-play record reached the Number 6 spot as well. Brunei's 2011 Pelangi Awards nominated him in their Best Top 10 Male Vocalists category. That same year, he wrote and produced a top charting EDM/pop song for young and upcoming talent, Mayzrel Asran "La La La", the winner of Bintang Kecil Program in Brunei. He also ventured into producing hip-hop and rap genres by collaborating with respected artists Jazz Hassan and Erhyme of SpaceVibe Studio on a track that circulated popular music stations in Brunei and Sarawak for some time. Udi Luqman wrote and produced an extremely successful song for Neff Aslee on local television program, “Passport to Fame” titled, “Tak Mahu Abang Romeo,” and followed this release with the insanely popular and more simply titled, “Juliet,” which topped Brunei pop charts at Number 1 for over two months. Now under his UDI LUQMAN project releases, signify his decision to represent himself in the music world with more passion than ever before, and intends to produce many more songs of this shining quality over the coming months and years.