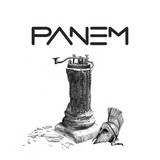 Telling stories through music Panem is an indie rock band from France. Their debut release 𝚉𝚎𝚒𝚝𝚐𝚎𝚒𝚜𝚝 / 𝙰𝚋𝚜𝚘𝚕𝚞𝚝𝚎 𝙼𝚘𝚗𝚘𝚙𝚘𝚕𝚢 was voted 𝗔𝗟𝗕𝗨𝗠 𝗢𝗙 𝗧𝗛𝗘 𝗬𝗘𝗔𝗥 2020 in Music Waves' Readers' Poll. The name Panem comes from the Latin phrase panem et circenses (bread and games or circuses), an expression that denounced the Roman emperors' egotism: the deliberate use of bread distributions and the organization of games for the purpose of flattering the people in order to attract the benevolence of the masses - which still persists to this day in the Zeitgeist. To categorize a band is a perilous yet inevitable exercise, to define a musical genre without feeling boxed into it.

Our songs are said to tell stories. So maybe that's it: telling stories through music over an indie rock background, somewhat progressive with textures and atmospheres. Panem is the sum of each member’s influences and musical travels, the sum of multitudes.