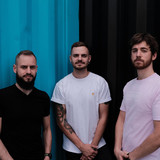 Exactly seven years ago, in October 2013, the three guys then in their early 20s, Andi, Emanuel and Pazi, shared the stage in Graz, not knowing that this would be their last show together. Happy with a new lineup and fresh energy, things turned out to be quite different than what they expected for the band. Not only did the geographical distance between them become greater, but all of them were individually confronted with their own reality. More and more personal blows of fate followed. Besides starting and growing a family, the sad and sudden passing away of close family members and friends hit them hard. Relationships are established and followed by intense break-ups. The feeling of finally having arrived while others were in the middle of a chaotic journey of self-discovery. In short: alternating ups and downs. Nevertheless, one thing connects them over the long term: the longing to create music together. After years of intensive work on the follow-up to "Where Life Takes Us", the trio is now convinced that they have not only put the experiences of their "20s" on paper, but that they have created an album that works as one piece of art and will remind them of both the bright and dark times for the rest of their lives. But where does life take the three of them now? Perhaps into the great unknown.. On 16th of October the guys released their new song "Seven" via YouTube. After 8 years it's the first new music off their new album, which will be released later this year.