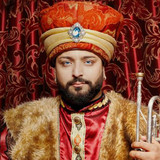 From humble beginnings in his Macedonian village of Strumica, to packing out festival dance floors across Europe as the leader of his Aguševi Orchestra, trumpet prodigy Džambo the “Funky Tiger of Macedonia” has arrived with his ferocious new album “Brasses for the Masses”. Džambo has risen to become the most widely celebrated Macedonian musician since the late Esma Redžepova. Džambo’s sound developed as a result of his cultural background and varied musical taste. While his initial musical interest was deeply rooted in the brass band traditions of the southern Balkans, young Džambo kept his ears open, listening to music from both east and west – appropriate for a Macedonian youth in the historical melting pot of the former Yugoslav republic. Listening to Jazz and Funk, Turkish music and movie soundtracks, Dzambo combined these musical ideas using his gypsy heritage as a foundation from which he developed his own distinctive sound. Heralding the future of the Balkan brass sound, “Brasses for the Masses” is a reflection of Džambo’s vision for Balkan brass music. Across the albums twelve track journey Džambo pays respect to the regional roots of the genera, whilst combining hard grooves and uplifting melodies, bringing the music to the dancefloors of a younger generation.