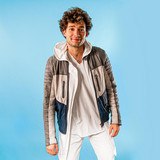 Charleon is a multi-skilled musician when it comes to DJing, composing, performing, and producing. He describes his sound as “feel-good dance music with saxophone” and of course, this talented artist also stands out with his electronic sound that shines with melodic and tropical elements. Charleon is a skilled tenor saxophone player and this instrument accompanies him to every DJ set. His saxophone solos are the pinnacle of his live show and have got not only the Dutch audience dancing, but he’s shared his music and performances globally for tours in China, India, England, France, Italy, Germany, and Spain. Charleon began to officially release music on his own independent label called Golden Love Music and the world quickly began picking up on his catchy feel-good sound. Singles like Go Back In Your Body (Tropical Edit) and We Got The World gained popularity, millions of streams, and the latter even made it into the Viral 50 Netherlands chart on Spotify. Moreover, We Got The World was featured in various Dutch TV programs. Dutch Radio station 3FM invited Charleon to play this song live and he brought along an entire band of live musicians especially for the occasion. Charleon’s biggest value and goal is simple: to make fantastic, uplifting music that combines the stylistic saxophone sound with danceable electronic beats. His music ticks all the boxes from catchiness to high energy and class.