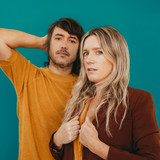 Hi! We’re cheekily named, Freedom Fry. A French/American married duo, aka Marie & Bruce. We connect the dots between Folk, ‘60s & ‘70s Pop, and modern Indie Rock. Our prolific writing habits - over 250 original songs and counting - and ability to bend genres and weave between English and French have helped us reach a variety of fans across the globe. With over 100 million streams and more than 75 song placements in television, films, and advertisements, you may have heard us in Atypical (Netflix), Locked Down (HBO Max), Shameless (Showtime) The Morning Show (Apple TV+), or during American Idol (ABC), amongst other places. We’ve kept quite busy and don’t intend to slow down any time soon …   Earlier this year we released our first all-French album, L’ Invitation. Now, we’re following up with new music every month. Follow us here on Spotify to stay in the loop. Thanks for listening!