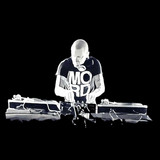 Spinning techno vinyl for over 2 decades has brought bookings in most of northern Europe. In the mid 90’s, start 2000 he had a major role in organizing techno events and bringing it to the legendary music venue Elværket in Helsingør DK, where he originally is from. In 2002 he decided to move to Sweden and also started producing music on his own leading to many releases on different labels. In recent years he has found a home base at the German label Rotraum Music, and also has regular releases on Acidworx. The last couple of years has been very busy with releases on Hydraulix Records, Odd Recordings, GND Records, Biotech Recordings, Dolma Red, Flatlife Records & Rawthing, to name a few. His tracks has been played and charted by such names as Dave the Drummer, Thomas Schumacher (Drumcode Radioshow), Ben Sims (RunitRed), S-File (The S-files), Perc and DJ Rush among others. He also recently had the pleasure to play in UK at Jaded Afterhours (Corsica Studios). The style both as a deejay and producer is usually a mixture of good old 303 acid and straight forward driving techno. Playlist | DJ Wank - DJ Wank [303 Tracks]