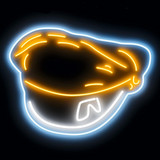 With their grimy beginnings back in the late 1980´s, this last decade saw nothing less than the second resurrection of the infamous Titans from The Big O(slo). «Hell, not even Jesus could do THAT!» music lovers worldwide were heard to shriek. November 2015 heralded the unveiling of not only the first new music since the 2012 Sexual Harassment album, but a new denim recruit and now a full member of the band ; keyboard wizard Crown Prince Haakon-Marius. Fully re-charged and having had great fun getting back in the studio as a six piece exploring new and inspiring gateways to songwriting and production, Turbonegro dropped another Deathpunk gem, Special Education, in May 2016. And so finally, undercover of the heavy blizzards of the Winter of 2017, the savvy six gathered in the studio in Oslo to embark on the venture that is now being unveiled as the ROCKNROLL MACHINE their ninth studio album to date. ROCKNROLL MACHINE dropped February 2018, almost to the day 20 years after the release of their now classic Apocalypse Dudes album, and continuous touring in support of the new album evolved seamlessly into the full on 30 Year Anniversary of Turbonegro in 2019.