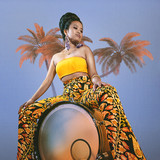 A Thai-born drummer and producer, Salin Cheewapansri aka Salin moved to North America to pursue her dream at the age of 19. From her humble beginnings playing drums on the streets, she worked her way up to playing in clubs with artists ranging in styles from Metal and Funk to Drum & Bass, Hip-Hop & Jazz. In addition to having worked as a studio drummer on several albums, Salin has performed at numerous festivals internationally, including Jazz Festivals throughout Canada. Her most recent achievements include a performance at the Polaris Music Awards 2019 alongside Dominique Fils-Aimé, as well as an award-winning recording on her album ‘ Stay Tuned’ which gained the title for ADISQ Best Jazz Album of the Year (2019) and for JUNO Best Vocal Jazz Album of the year (2019). Salin has also been featured in several television productions with the most recent being FORD UK MACH E Commercial