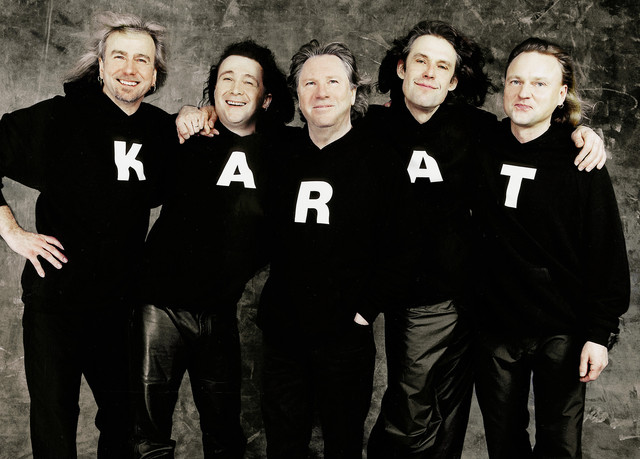 German rock band Karat formed in what was then East Germany in 1975 from the ashes of another group called Panta Rhei. The initial lineup consisted of singer Hans-Joachim "Neumi" Neumann, keyboardist Ulrich "Ed" Swillms, bassist Henning Protzmann, drummer Konrad Burkert, and guitarists Herbert Dreilich and Utlrich Pexa. Burkert and Pexa were replaced the following year by Michael Schwandt and Bernd Römer, and Neumann left the group 1977 to fulfill military duties, leaving Dreilich to take over lead vocals. They released their debut in 1978, which featured the hit "König der Welt." The group's penchant for progressive rock continued on 1979's Über Sieben Brücken, which featured their biggest hit, "Über Sieben Brücken Mußt du Geh'n," as well as the epic "Albatros," the latter of which boldly criticized the Berlin Wall. Schwanenkönig arrived in 1980 followed by the platinum Der Blaue Planet in 1982 and Die Sieben Wunder der Welt in 1984. A series of lineup shifts dominated the late-'80s/early-'90s incarnation of the group, and despite a constant flow of new material and releases, Karat's popularity began to wane. Dreilich suffered a stroke while on-stage in 1998, but recovered just in time for the band's 25th anniversary show in Berlin. The show was released on CD and DVD and the favorable reviews and general well-wishing from the public energized the band enough to head back into the studio to record some new material. The resulting Licht und Schatten arrived in 2003. Both triumphant and bittersweet, it was to be Dreilich's final bow, as he was diagnosed early in the year with lymphatic cancer and died later that December. At his request, Karat continued on with his 35-year-old son Claudius Dreilich taking over lead vocal duties, but had to change their name to K...! due to a trademark suit filed by the elder Dreilich's widow. ~ James Christopher Monger, Rovi