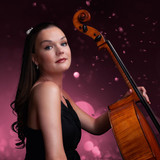 Cellist Sandra Lied Haga combines the endless perspective of the Norwegian landscape with passion into a rich sound – resonating with audiences and musicians since her debut at Wigmore Hall at the age of 12. The winner of the Equinor Classical Music Award 2019 has performed in major concert venues worldwide, such as the Great Hall of Moscow Conservatory, the St. Petersburg Philharmonia, the Athenaeum Bucuresti, the Salzburger Festspielhaus and Harpa. Sandra performed under the baton of conductors such as Rodolfo Saglimbeni, Ari Rasilainen, Thomas Søndergård, Shao-Chia Lü, David Geringas and Terje Mikkelsen. In recognition of her participation in the Verbier Festival Academy at the age of 17, Sandra was invited to recite her own concert at the Verbier Festival. Invitations by other international festivals followed, amongst them the Salzburger Festspiele, Utrecht, Sommets Musicaux de Gstaad, Pärnu Music Festival and Bergen International Festival. Bergen re-invited the cellist to play two concerts at the 2020 festival and Stavanger Symphony Orchestra features her as a soloist to present the music of her album performing the Rococo Variations in Stavanger. As committed chamber musician, Sandra Lied Haga collaborates