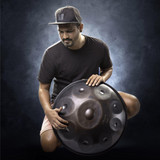 Faizan is a Maldivian drummer, multi-instrumentalist, composer, song writer and a handpan performer. He started his career in 2004, being one of the founders of the Maldivian thrash metal band, Serenity Dies, and now he is part of the progressive rock band, called Skyrock. Besides being the drummer in a big band line-up, he is also engaged in building his solo career, performing the handpan. His first video, Hang in there, was classified as the second Best Handpan Videos of 2016 (Based on musical technique, composition and cinematography) by Didge Project New York City. His new song ‘Aether’, featuring Amadeus Quartet will be part of his album, planned to be released in 2021.