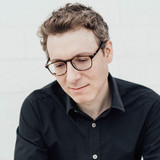 Nicholas Britell is a composer, pianist, and movie producer best known for his scores to such critically acclaimed films as The Big Short (2015), Moonlight (2016), and If Beale Street Could Talk (2018). His style has ranged from The Big Short's playful blend of jazz, funk, and classical elements to the more elegant and poignant Beale Street. Britell's first of multiple Academy Award nominations came in 2017 for his work on Moonlight. A graduate of Julliard's Pre-College Division and Harvard University who started playing piano at the age of five, Britell scored his first film as a college student in the early 2000s. After graduating, he found regular work on film shorts while keeping a day job. He eventually came to the attention of a broader segment of the film community when he performed his own piano composition, "Forgotten Waltz No. 2," for the 2008 short Eve, directed by Natalie Portman. Among varied projects in the classical realm (including Portals with violinist Tim Fain) and continued work on shorts, he wrote music for the TV documentary Haiti: Where Did the Money Go and the crime film Gimme the Loot, both released in 2012. His additional music, such as violin pieces and spirituals, appeared in the 2013 Best Picture Oscar winner 12 Years a Slave. Meanwhile, he produced a short film called Whiplash, later developed into the 2014 Best Picture nominee of the same name, which he also co-produced. A year later, the Adam McKay-directed Best Picture nominee The Big Short featured a Britell score. Steady work in Hollywood features followed, beginning with Free State of Jones and the Barry Jenkins-directed Moonlight in 2016. The latter earned Britell his first Oscar nomination for Best Original Score. Branching into episodic television, he composed the music for the HBO comedy-drama Succession, which began airing in mid-2018. Back on the big screen, he got a second Academy Award nomination for 2018's If Beale Street Could Talk, another collaboration with Barry Jenkins. Britell also scored Vice, a McKay-directed Best Picture nominee from the same year. ~ Marcy Donelson, Rovi