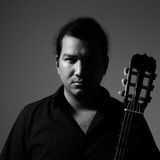 Born in Venezuela, his remarkable talent brought him all over the world until he finally settled in Vienna. His repertoire, again marked by a complete absence of box-like subdivisions, ranges from Baroque to contemporary music and is always given his personal imprint and a Latin-American flavour. Jonathan grew up in a highly musical family and cut his musical teeth, as it were, singing and playing the Venezuelan national instrument, the “cuatro”, a small to mid-sized guitar so named after its four strings. He started out by teaching himself the guitar, taking his inspiration from tapes not only of the great masters of classical music like Bach and Beethoven, but also of metal bands like Metallica or Pantera. This first phase came to a close when Jonathan got a even deeper understanding of music by the hands of Luis Ochoa at the Music Conservatory of Aragua, Venezuela. Jonathan continued his studies with Walter Würdinger at Vienna’s University of Music. By the time he obtained his Master of Arts – with distinction– he was already performing regularly in venues such as the Wiener Staatsoper , the Konzerthaus and the Musikverein. This was in addition to international appearances from Santiago de Chile over Hamburg to Minsk. Jonathan’s latest project involves star tenor Juan Diego Flórez, who invited him to collaborate not just as guitar player but also as executive producer, arranger &amp; musical advisor. The exciting result of this collaboration will soon be released.