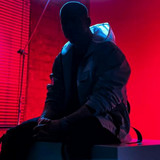 Rob Level was born and raised in a notoriously dangerous part of South Side Chicago. At 5 he was given up by his mother for adoption as his father was dying from brain tumors who died shortly after. After years in homes, juvenile detention centers, homeless shelters, and jail, he was able to turn his experiences into inspiration through his music. Known for his clever wordplay, real talk style, and deep subject matter, he interacts with fans on a daily basis and even owns a business dedicated to helping young rappers succeed. His new music style marks his progression into a more attention grabbing, unstoppable sound, but his signature brilliant bars haven't gone anywhere.