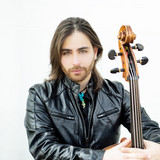 Born in Valencia, 1988 to Italian immigrants and moving to the United States at an early age, Carmine Filippo Miranda (Carmine Miranda) is a Venezuelan-American cellist, international soloist and recording artist. Carmine began his musical studies at the age of seven at the Carabobo State Music Conservatory in Venezuela, where he studied his first years of Theory and Solfege, finally graduating from the Private Institute of Musical Education or I.P.E.M. He studied with cellists Luisa Fuentes, Valmore Nieves and William Molina, at the Latin-American Academy of Violoncello, and the Simon Bolivar Conservatory of Music (the institution that spawned the famous “El Sistema”). At the same time he was a member of the National Youth Orchestra and the Orchestra of Beethoven under the direction of Gustavo Dudamel and Giuseppe Sinopoli. In the U.S. he studied with cellists Ross Harbaugh, Lee Fiser (LaSalle String Quartet) and was a pupil of cellist Yehuda Hanani at the University Of Cincinnati College-Conservatory of Music where he obtained a Bachelors of Arts in music, Masters Degree and a Doctoral Degree with honors. He has participated in several music competitions as a soloist and chamber player winning several recognitions and awards at a national and international level. Among them include: the Coral Gables Music Club Award for “Best Instrumentalist”, won the first prize of the 2005 Alhambra Music Competition, 2005-2006 National Orchestra Award for “Best Soloist” from the FMEA (Florida Music Educators Association), the 08-09 University of Cincinnati Cello Competition, a Distinguished Award from the 2012 IBLA international competition, “Gold”, “Silver” and “Bronze” Medals from the 2014 Global Music Awards for Best Of Show (GMA's highest honor), Best Emerging Artist, Best Instrumentalist, "Gold" Medal from the 2016 Global Music Awards, two Hollywood Music in Media Awards nominations (2015 and 2016), and also a laureate of Fischoff, Concert Artist Guild and Hudson Valley Competitions. Carmine’s performances and recordings have appeared in radio and TV stations, as well as PBS affiliated stations all over the United States, Europe, Latin America and Asia. An avid soloist, he has performed with several chamber ensembles and orchestras including: Caracas Municipal Symphony, Karlovy Vary Symphony Orchestra, South Czech Philharmonic, Moravian Philharmonic, among others. Carmine has also performed in prominent concert halls and music festivals around the world including Carnegie Hall (NYC), Smetana Hall (CZ), the Aula Magna Hall (VE), International Český Krumlov Music Festival, Parma Music Festival, Bowdoin Music Festival, Close Encounters with Music Series in Great Barrington, NY and many more. Carmine has collaborated with internationally acclaimed artists such as Yehuda Hanani, Awadagin Pratt, Rodolfo Saglimbeni, Yuriy Yanko, Mario Košík, Petr Vronský, Spanish composer Luis Serrano Alarcón and Grammy Nominated composer Michael Hoppé. At the age of twenty two and twenty three, Carmine recorded the Six Cello Suites by Johann Sebastian Bach under the label Centaur Records and Alfredo Piatti’s 12 Caprices for Solo Cello under the label Navona Records, joining the ranks of the youngest in the world to record these entire works. In 2013 Carmine completed the United States premiere of Nikita Koshkin's "L'istesso Tempo" composition for cello and guitar and in 2015 completed a world premiere recording of Yves Ramette’s sonata for cello and piano. He was also selected to represent the University of Cincinnati as a soloist for a multi-state American tour with the CCM Wind Orchestra culminating with an opening night performance at the College Band Directors National Association (CBDNA) National Conference in North Carolina’s Aycock Auditorium. As a scholar and academic, Carmine is regularly invited to conduct masterclasses as a professor and lecturer at some of the finest institutions and music festivals around the world. In 2006 he wrote a compelling article published in one of the oldest musicological journals in the U.K. (The Musical Times, London, Spring 2016) where he uncovered a code written by Robert Schumann in his Cello Concerto. Likewise, Carmine is the president and founder of the independent electronic music label and production company RLU Records, equally skilled as an electronic and dance music composer, producer and DJ under the pseudonym “45trona Ut”. Currently Carmine Miranda is an exclusive recording artist for PARMA Recordings, and plays on a 2005 Jules Azzi cello made in New York City. Carmine is a Dogal USA artist and performs on Dogal’s Montagnana strings handmade in Venice, Italy.