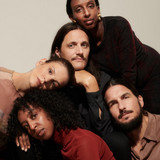 Sirens of Lesbos are a group of singers, lyricists, instrumentalists and creatives who are about to revive and modernize the Worldbeat genre with their eclectic and groove-led approach. They draw on diverse backgrounds and upbringings to create an irresistible melting pot of sound. Releasing on their own self-titled label, their music is fast attracting fans far and wide, from BBC 1Xtra’s Jamz Supernova, to BBC 6 Music’s Nemone, to Worldwide FM’s Gilles Peterson and Beats 1’s Ebro Darden. The group first found fame by accident: the result of a self-imposed challenge to write an Ibiza hit. “All of a sudden we were in talks with almost all major labels and publishers out there” recalls Friede. “In the end we signed with Epic / Sony. But it was like two drunken teenagers getting married in a Las Vegas chapel... once we sobered up, we both realised that we were not meant for each other.” Quickly becoming disillusioned with their situation, they chose to start over and pursue the music they had stronger passions for. As well as their diverse musical inspirations, their sound and lyrics are also the product of their mixed backgrounds and upbringings. The Serag sister’s parents were political refugees and freedom fighters from Sudan and Eritrea, as were Friede’s Czech parents following the Prague Spring uprising in 1968. Buss’ father is English, and Switzerland proved the perfect place for these different cultures to mix and combine with contemporary influences.