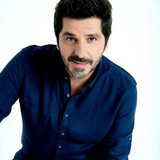 Patrick Fiori, born in 1969 in Marseille, is a pop singer who rose to prominence through his performance in the successful musical Notre Dame de Paris and on "Belle," the hit single it spawned. This song, a collaboration with co-stars Daniel Lavoie and Garou, topped the French charts for many weeks in 1998, paving the way for a more financially viable recording career than Fiori's previous albums (1994's Puisque C'est l'Heure and 1995's Le Coeur a l'Envers) had seemed to suggest. In 1998, his album Prends-Moi, a collection of heartfelt power ballads, performed well in the French charts but did not mark a strong leap toward solo credibility. Toward the late '90s, he and fellow singer Lara Fabian formed a headline-grabbing couple that increased his fame. In 2000, he left the troupe of Notre Dame de Paris, boosted by the success of his song "Que Tu Reviennes," written by Calogero and featuring on his album Chrysalide. By now Fiori had a more solid solo style and was also making a name for himself by penning compositions for other singers, including Julie Zenatti, Liane Foly, Patricia Kaas, and Tina Arena. A fourth album appeared in 2002, with contributions from Jean-Jacques Goldman, and a fifth in 2005, Si on Chantait Plus Fort. This album's sales were boosted by his huge number one single "4 Mots Sur un Piano," with Goldman and Christine Ricol, in August 2007. A year later Fiori completed a collection of world cinema classics, Les Choses de La Vie, that also included two new songs, “Aurora” and “Merci”. During 2010 he released his fourth album, L’Instinct Masculin, which was again co-written with long-term collaborator Goldman. The acoustic-pop inspired record also included a duet with rock & roll legend Johnny Hallyday on “Je Viendrai Te Chercher”. In 2012, Fiori released L'instant masculin - Live au Dôme de Marseille as well as the singles "All By Myself" and "L'envie D'aimer", which also featured Julien Clerc, Catherine Lara and Liane Foly. ~ Caspar Salmon, Rovi